In 2018 I decided to undertake a personal experiment; go one year without cooking. I know it sounds pretty great, and in all honesty it was! I was new back to Vancouver after living in Europe for a decade and was eager to explore the food scene. And what better way than to dive in with this personal challenge. I tasted more than 120 restaurants in that year. I went for brunch twice a week and was visiting restaurants on average 5-6 nights a week. I found a number of favourites and revisited them to see if they could pass the consistency test of similar experiences, months apart. Many did.

Over the Easter long weekend I took a foody road trip with some friends down the coast. We visited Seattle for one night and Portland for two. The restaurants were curated by @flygyrll, our very own Diner Devils blogger (the other one). We had four distinct food experiences on this trip.

In Seattle we visited a restaurant that does Pacific Northwest cuisine. It was creative and interesting with some fantastic flavours. We arrived in Portland mid-afternoon and went to a BBQ restaurant for lunch. All their meats were smoked in-house and they had an authentic selection of southern side dishes. For our two dinners we went to a Mediterranean restaurant and a Peruvian. Both were excellent and favourites of the group.

We marvelled at how much we liked the dining experiences, the layouts of the restaurants and how amazing the food was. And we wondered why it seemed so much better than what we get in Vancouver. Then it dawned on me; their restaurants are pure. They serve Peruvian food in a Peruvian restaurant the Peruvian way. In contrast, way too many of the known Vancouver restaurants serve fusion which is the mixing of two or more culture’s foods. Some restaurants do it exceptionally well such as AnnaLena and Torufuku. Both are in my list of top 25 Vancouver restaurants. But there are far too many who rely on it.

What’s with all the fusion?

Fusion can be a form of culinary laziness, a netherland where mediocre food can hide out in obscurity. I think too many chefs rely on the idea that it’s never “wrong” when it’s fusion. And that gives them a safe environment, but one where lack of effort can prevail. It’s harder to do pure, authentic cooking because there’s nowhere to hide. It’s either right or it isn’t and there’s not a lot of wiggle room. It requires passion, talent and a desire to pay homage to something wonderful. It’s a commitment.

Vancouver has a lot of amazing things that make it top world lists for this, that and the other. But on the flip side we also have a large percentage of douchebags in this city. It feels like way more than our fair share. And unfortunately they have permeated the local food scene; both as chefs and as the target market for many restaurants. Look no further than Yaletown (douchebag ground zero) where the restaurants offer a worse level of service, with higher priced menus than in any other part of the city. And I would go one step further and say (for the most part) that Yaletown is a creative wasteland as the clientele have more money than sense.

Fusion can certainly be done well, but it can also create a muddiness in flavour and execution which is prevalent in restaurants like Kissa Tanto. I understand the drive young chefs have to be creative and to make a name for themselves, which I think has led to many of the fusion restaurants. But you can be equally creative while staying true to the parameters of a specific cuisine. Look no further than Tavola which is one of the more authentic Italian restaurants I’ve visited in Vancouver. It takes me back to my multiple visits to Tuscany. See, they find ways of infusing their own take into the traditional methods which creates mouth watering dishes that are both interesting and traditional.

Hope is on the horizon

Portland seems to have a genuine love for food. They know what good is, how to identify it and seek it out. I am not so sure if, on average, Vancouver restaurant lovers have the same palate. Or desire for something wonderful. I hope we get there cause there’s a lot of talent in our restaurants. And if it was more acutely focused, I think the overall caliber of the Vancouver food scene could be on a world-class scale. We’ve got a ways to go and some growing up to do. But I’ve seen what our food scene can be and it brings me hope. 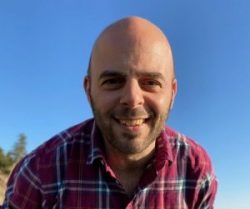 Alistair is a real lover of food having visited 300 restaurants around Vancouver over the last 3 years. Passionate about sharing food while connecting with people, he is the founder and the host of the Dinner Devils.  Having spent 10 years living in Europe, he is bringing some of that food culture back home with the creation of this group.